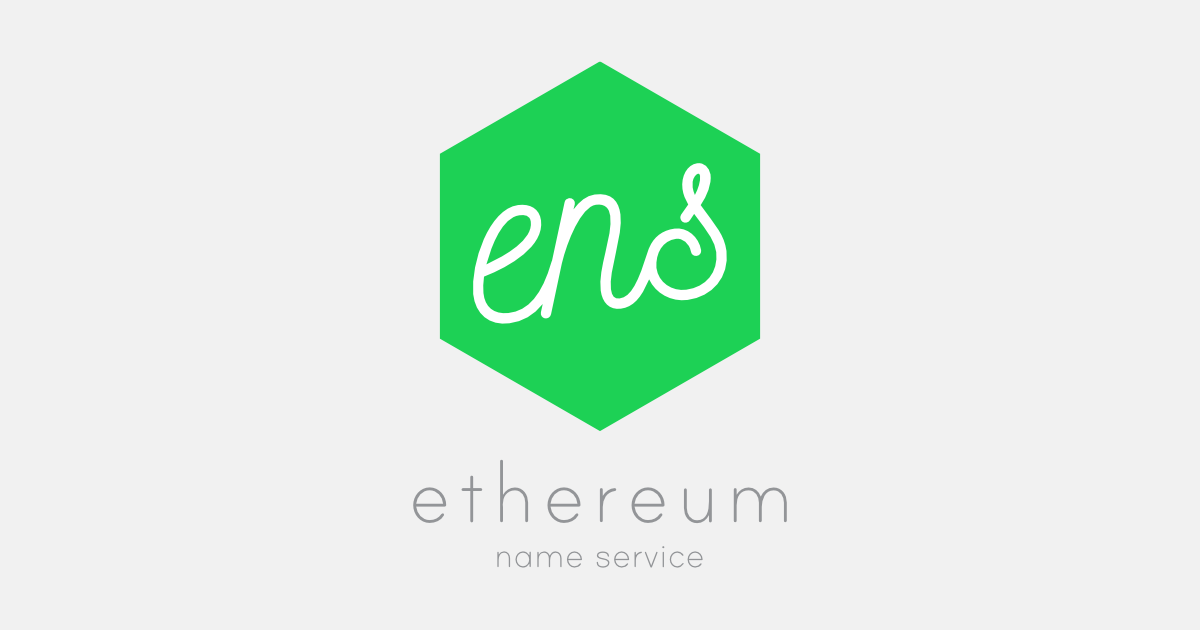 Names in the Ethereum Name Service (ENS) look just like the familiar DNS addresses we use today, with ".eth" initially being the only top level domain (TLD) available currently.

An Ethereum address looks like a string of mixed case letters and numbers, but behind it lies a private key so that only the owner of that private key can spend or send their ether.

Contracts and other various programs each have an address too.

That address is called a hexadecimal (or hex). That hex is a long string of numbers and letters in mixed case that looks something like this:

As you can imagine, this can be can be quite a pain to type manually, especially since the chance of making an error is high. Compare this to Coinbase, Paypal or Venmo; where you can send money to someone just using their email address or a username.

ENS eliminates the need to copy or type that long hexadecimal addresses. With ENS, you'll be able to send money to a friend at "mycoolwallet.eth" instead of "0x4abv577c502eFbCD..", interact with a smart contract at "mycoolcontract.eth", or visit a Swarm-hosted site at "coolswarmsite.eth".

ENS is built on smart contracts on the Ethereum blockchain, meaning it doesn't suffer from the insecurity of traditional systems; as users can be sure names entered will work the way their owner intended.

ENS operates in a distributed fashion for both its infrastructure and governance. Anyone can register a .eth domain name for themselves by participating in an auction process, mediated by the blockchain.

Even as we are in the infancy stages of this new market, it’s become clear that ENS Names are becoming quite valuable and may increase in value over time as Ethereum continues to become more widely adopted.

Considering the fact that ENS names are beginning to become more valuable, a trustless and decentralized solution will be important for people looking to eliminate third party risk of these high value transactions.

Name Bazaar is a peer-to-peer market for the exchange of names registered via the Ethereum Name Service built with a near auction style user interface. Users of Name Bazaar can locate, buy, sell, request, or track the status any ENS Name - even unregistered names.

Name Bazaar offers trustless and secure peer-to-peer name trading with no added fees for the buyers and sellers, this means all actions take place on the public Ethereum blockchain without a middle-man.

For names that are already registered and owned by someone; this is where Name Bazaar comes in handy - as users can buy, sell, and share their .eth domains in an auction style setting. This creates a much needed secondary market for ENS names.

The NameBazaar launch is also an important step forward for the district0x project because the smart-contracts being implemented consist of core functionalities for the d0xINFRA network, as outlined in their white paper.

District0x is a network of marketplaces and communities that exist as decentralized autonomous organizations on the district0x Network. All internet citizens will be able to deploy districts to the network free of charge, forever.

The first district deployed; Ethlance, is a decentralized job market which allows companies to hire and workers to find opportunities. Name Bazaar is the the second district being launched; with more to follow.

The districts launched by district0x are built on a standard open source framework comprised of Ethereum smart contracts and front-end libraries, called d0xINFRA. This powers the various districts with core functionalities that are necessary to operate an online marketplace or community; including the ability for users to post listings, filter and search those listings, rank peers and gather reputation, send invoices and collect payments.

The framework is designed to be open and extendable, allowing districts to be customized and granted additional functionality through the use of auxiliary modules - which can be thought of like "plug-ins" or "extensions". District0x is powered by Ethereum, Aragon, and IPFS.

district0x has it’s own token, DNT, which is used as a means of facilitating open participation and coordination on the network. DNT can be used to signal what districts should be built and deployed by the district0x team and can be staked to gain access to voting rights in any district on the district0x Network.

Perhaps the coolest thing about District0x is that you don't need to know how to code or have any technical skill to launch a district. If you dream it - the team can build it!

district0x makes use of a district proposal process to allow the community to determine what districts they would like to see built and deployed to the network next by the district0x team. Winning proposals are voted on by the community using DNT.

For more information about the district0x Network: